De re coquinaria, sometimes attributed to Caelius Apicius or Marcus Gavius Apicius, is a collection of approximately 500 recipes written in Vulgar Latin. (Cooking and Dining in Imperial Rome, by J. Vehling, 1926, page 18.) The dating of the manuscript is tricky, the oldest extant manuscript, currently held by the New York Academy of Medicine, dates to the early 9th century CE and the original text may date as far back as the 2nd century CE, though it more likely dates to the 4th or 5th century CE. (Cook like a Roman: The New York Academy of Medicine’s Apicius Manuscript, by A. Garner, 2015. https://nyamcenterforhistory.org/2015/10/15/cook-like-a-roman/)

Pork shoulder, (Perna classically refers specifically to a haunch or ham together with the leg. http://www.perseus.tufts.edu/hopper/text?doc=Perseus:text:1999.04.0059:entry=perna) whereby it is seethed with many figs and three laurel leaves, the skin is pulled off and cut into a “checkered form” and filled with honey. Then you must combine (spelt?) flour and olive oil and return the same skin, afterwards it is cooked in the dough, then remove it from the oven when it is done and serve.

The ham should be braised with a good number of figs and some three laurel leaves; the skin is then pulled off and cut into square pieces; these are macerated with honey. Thereupon make dough crumbs of flour and oil lay the dough over or around the ham, stud the top with the pieces of the skin so that they will be baked with the dough bake slowly and when done, retire from the oven and serve.

Pork: In the classical period, pigs were probably the most common source of meat in most people’s diets. (Food in the Ancient world from A to Z, by A. Dalby, 2003, page 268.) In a city, Romans would likely have obtained their meat from a butcher in a macellum (indoor market) (Macellum, last updated April 2017. https://en.wikipedia.org/wiki/Macellum) or forum suarium (pork market) (A New Topographical Dictionary of Ancient Rome, by L. Richardson Jr., 1992, page 174). Considering the macellum in Pompeii, it appears that live animals were kept in the market and slaughtered as needed, meaning that meat would have been very fresh. (The Oxford Encyclopedia of Ancient Greece and Rome, ed. M. Gagarin, 2010, page 199 under Food and Drink, Roman.)

As a city dweller, I acquired my pork from a local farmer’s market (the closest I could get to a macellum). It was slaughtered less than a week before I bought it and not treated with any preservatives (although it was frozen). While the recipe appears to call for pork shoulder, I ended up getting pork sides because that’s what was available with the skin still on, in addition to the pork shoulder steaks that made up the majority of the meat in the dish. The breed of pigs my pork comes from is not the same breed as was available to the Romans in the time of of De re coquinaria. (The farmer who ran the booth is working on developing his own breed that’s more resistant to Alaskan winters.) There appears to be no getting around this and I’m not sure what difference it makes in the flavor. The fat content is the one thing I am guessing is different, as pigs (and other livestock) have been bred to be larger and fattier in the intervening 1,500 years. (History of Heritage Pigs, Excerpted from A Rare Breeds Album of American Livestock, pg 71-73. https://livestockconservancy.org/index.php/heritage/internal/historypigs)

Dried figs: Cultivated figs have been established in the Mediterranean region for approximately the last 6,000 years. (The Fig: Overview of an Ancient Fruit, E. Stover et al., in HortScience August 2007 vol. 42 no. 5, page 1083-1087, http://hortsci.ashspublications.org/content/42/5/1083.full)  As the recipe I am using attests, their consumption by the Roman population is well documented. The word used in the original Latin recipe, caricis, is the ablative plural of carica, a type of fig from Caria (a Roman province in modern day Turkey), available in Rome in a dried form. (The Oxford Encyclopedia of Ancient Greece and Rome, ed. M. Gagarin, 2010, page 198 under Food and Drink, Roman.) In Rome herself, dried figs might have been acquired on the Vicus Tuscus, or elsewhere from general markets or specialized fruit markets.

As a city dweller, I acquired my dried figs from a produce market (Natural Pantry). The figs in this dish are dried Candida figs, a Californian cultivar, of an Adriatic type. I went hunting for Turkish figs, and while they are easily available online, I was not able to get them in time.

Honey: Honey was one of the primary sweeteners available to the Romans (in addition to dried fruit and wine must syrup). (The Oxford Encyclopedia of Ancient Greece and Rome, ed. M. Gagarin, 2010, page 198 under Food and Drink, Roman.) I have been able to find no information about whether or not Roman beekeepers finely filtered or heated their honey to the point of pasteurization prior to selling it.

I am using raw, unfiltered wildflower honey bought at a farmer’s market from a local beekeeper. To the best of my knowledge this is as close to the original ingredient as I could get, excepting that these bees subsisted on Alaska wildflowers, not Roman ones.

Laurel Leaves: The recipe calls explicitly for three bay leaves from the bay laurel (Laurus nobilis). Unfortunately, the leaves I purchased that were labeled “Bay Leaves” are not true bay leaves, they’re a similar but unrelated species of plant called a California Laurel (Umbellularia californica). I found this out after I had dumped them in the pot and am now a little irritated. (ETA: VERY IRRITATED!)

Spelt Flour: The recipe does not provide for what type of flour should be used, however, far, from whence farina, refers to spelt. (http://www.perseus.tufts.edu/hopper/morph?l=far&la=la&can=far0#lexicon) Therefore, I erred on the side of caution and used spelt flour.

Grain was tightly controlled in Rome. The Prafectus annonae, or Prefect of the Grain, governed the allotment of grain in the city. At different periods, it was either provided free or at a subsidised price. (The Roman Empire from Severus to Constantine, by P. Southern, 2004, page 326.) Grain was received un-milled and taken to a miller to make it into flour. (Cato’s Roman Bread, by Neill, 2012. http://pass-the-garum.blogspot.com/2012/10/moretum.html) I purchased my grain pre-milled at an unsubsidised price from a local market. I thought about borrowing a friend’s stand mixer-powered grain mill, but could not find un-ground spelt in town.

Olive Oil: Olive oil was one of the major ingredients in Roman cooking. (The Oxford Encyclopedia of Ancient Greece and Rome, ed. M. Gagarin, page 199 under Food and Drink, Roman.)  Roman olive oil was made by pressing olives and was presumably all olive. Modern olive oil may be adulterated with other oils and still sold as olive oil. (Slippery Business, by T. Mueller, published in the New Yorker on August 13, 2007. http://www.newyorker.com/magazine/2007/08/13/slippery-business)  Therefore, I cannot be certain that the oil used in my dish is 100% olive oil.

Romans would have purchased oil in markets. I bought mine at Fred Meyer’s.

Water: Water was not a part of the original recipe, however I added it to both the pork and the dough to expedite the process. I cannot document this as part of the recipe.

The primary deviation in my process is in the method of cooking and baking. I am using a gas stovetop and oven to cook in as that is what I have available. I am doing my cooking in a cast iron pan to simulate the diffused heat that would have resulted from cooking over coals as done in a craticula. (A craticula is a form of Roman stove attested to in the Pompeii finds. See http://gallery.nen.gov.uk/asset89702_2415-.html for an example in use.)

Vehling translates elixaueris as “braised”, however, the Cocordantia Apiciana, a concordance of terms that appear in Acipius’ text relates elixaueris to elixus which is translated by Lewis as boiled, seethed, or sodden. (Concordantia Apiciana, by A. Urban, 1995, page 141.  See also http://www.perseus.tufts.edu/hopper/text?doc=Perseus:text:1999.04.0059:entry=elixus) Accordingly, I cooked my meat in its own juices with a little water added in a manner closer to boiling than braising.

Everything in the pan

The recipe doesn’t say anything about cutting the meat up, however, I discovered pretty quickly that the meat wasn’t going to cook evenly if I didn’t make the pieces smaller.

I cooked the meat slowly over low heat for approximately an hour to ensure the flavors were well developed.

I pulled the skin (so slimy) off the side pieces, cut it up, and dumped in a cup with honey to soak. This was my best interpretation of the instructions “the skin is pulled off and cut into a “checkered form” and filled with honey.” Another option is that the skin may have been pulled off in a larger piece and then scored with a checkerboard pattern rather than chopped up. The skin pieces I had were already sliced thin, so this wasn’t an option.

To make the dough, I added oil to the flour in small increments, mixing the flour and oil together by hand until I had crumbles. I added more oil, but the dough was not coming together so I added water and oil in alternating measures until I had a good pie dough. The original recipe does not mention water, however I could not get the flour and oil to make a good dough without the addition of the water.

The dough was a bit tougher than standard pie dough. I could not find any evidence for Roman rolling pins so I pressed it with my fingers into a roundish flat slab and got it as thin as it would let me. 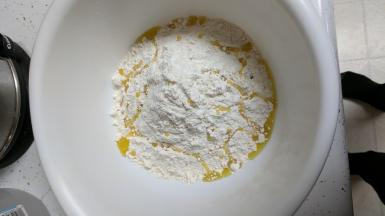 Mixing the flour and oil to make dough

Vehling argues the dough should go around the ham alone, but I think he’s read into the original recipe information that isn’t there. I kept some of the figs with the meat for added sweetness and moisture in the baking. I left the dough quite thick to hold up to any leaking juices. I am not sure if it’s meant to be eaten.

As stated above, I am deviating from documented practice by baking my figgy piggy in a gas oven. I set the oven for 350 degrees fahrenheit and baked my creation until the crust was “done”.

Roman baking was done in a wood fired oven. In larger homes, this would have been quite similar to a modern wood-fired pizza oven. Smaller portable ovens also existed. Baking temperatures in wood fired ovens can be significantly higher than I am baking at. To better simulate a wood-fired oven, I should have baked my dish on a pizza stone, I didn’t think of this until I was well into the baking process.

Baking piggy, the parchment paper is wholly modern and there to facilitate cleaning later.

I am pleased with the dish I made. Having tasted some of the pork (quality control!), I found it quite sweet to the modern palate, but the bay leaves made it more than just sugary meat. I held aside the remaining figs to be eaten with the dish as a garnish, because why not! I am very unsure about the use of the skin on the crust. I tasted a piece and found it basically un-chewable. I don’t get it, but I’m pretty sure the translation on that part is correct.

I do not think this is a 100% period dish. However, I believe I came quite close using modern tools and with the foods available in my humble domus, far from the heart of Rome.