First, this is one peer’s comments/opinions, mine. If something upsets you, please contact me and we can talk about it. Second, I live in Oertha and so that’s where the majority of the meetings I attend are. Meetings in Oertha and Central are typically the same, but I don’t want to speak for meetings I haven’t attended. Last, but not least, obviously this only applies to Pelican and Laurel meetings, I’ve never been to Chiv or Defense meetings (though I’m told the Chivalry have scotch)!

Questions or concerns can be sent to me at the email address at the end of this essay type object.

So, what actually happens at an Order meeting?!

Can you tell me more about how discussions work?

No, but not because it’s a secret, because the discussions are different every time. We try to keep the discussion to the candidate’s body of work and PLQs, but we’re only human and sometimes we get distracted. Want to know what we’re looking for? Aside from what’s in Corpora, it really depends on the Peer. You can find my thoughts on criteria for admittance here (Pelican) and here (Laurel).

The List is the list of Candidates who the Council believes is roughly two years out from elevation. HOWEVER, the List is 1) not hard and fast, 2) not a static thing, 3) not the be all and end all. Why do we use a list if we’re not tied to it? Humans like organizing things. The List helps us order our universe and keep track of potential new peers. Being on the List doesn’t mean that a person will definitely be elevated in two years’ time and not being on the List doesn’t mean they won’t. It’s a guide, not a rule or requirement. 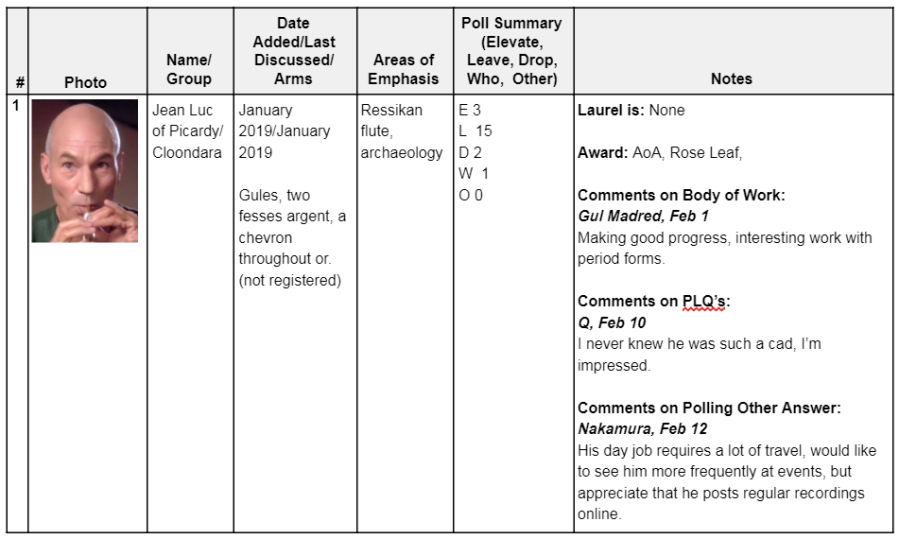 Believe that someone should be considered for a Peerage? Please write us a letter. You can use the award recommendation form here:

The more specific you are the better. Note, other than acknowledging that the Council has received your suggestions we cannot discuss what happened in the meeting.

You can also email the order Clerks directly at:

A brief aside on electronic polling.

In recent years, the Kingdom of the West has added electronic polling to augment in-person meetings. Electronic polling uses Google Classrooms to provide a venue for online discussions. Individual Candidates on the List are given classrooms that are used to collect comments and information on their body of work and PLQs, these are then copied onto the physical copy of the List provided at in-person meetings. Pre-polling (held before Crown events) is used to speed up the meeting process. An important note: Online polling does not take the place of in-person meetings. Any decisions about elevations or drops are done only in Council, never online.

Someone told me I’m on the List, what does this mean? Who can I ask about it?

This is tricky because we try very hard to avoid letting folks know if they’re on the List (it adds pressure that no one wants, I promise, I’ve been there). I understand that knowing you’re on the List can cause feelings of excitement and anticipation, or anxiety and stress. If you want to talk to someone about whether or not you’re on the List, I would encourage you to talk to someone you know well who’s on the Council. Don’t know anyone? Feel free to drop me a line, I’m nice (unless I’m sleep deprived and without my coffee, then I can be a bit brusque). PLEASE NOTE: I won’t confirm if you’re on the List or not, and I highly doubt anyone else will either. However, I/we will listen to your concerns and can talk to you about any feedback the Council might have or we might have as individuals. Some Council members are also willing to discuss you as a potential candidate. I’m not as good at this kind of theoretical, so I can’t volunteer myself for this.

I heard the Council said X about Y and that upset me.

The flip side of this is the rumor mill. Sometimes, even with the best intentions, stories get started and people are hurt. Before passing something you heard on, consider that what you heard may be missing the context or other important information. We all want to be in the know, but sometimes it’s best to just let things go.

I have other questions about meetings or just want to talk.

Feel free to write to me, cynehild@westkingdom.org or https://www.facebook.com/cknudsenlatta. I may or may not actually be able to answer your questions, but I can try!

Thank you to the kind individuals who helped me with editing this document, Mistresses Else, Brid, Tullia, Donata, and Chani, and Sir Dirk.